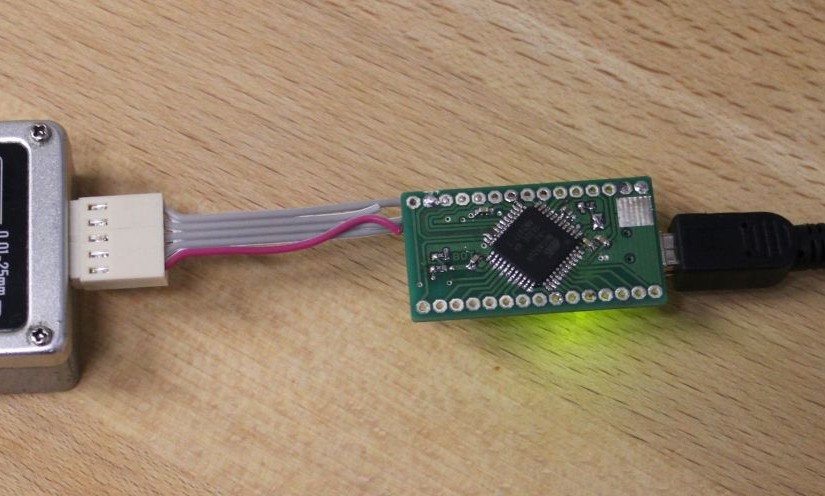 I am in need for a z-measurement device for my cnc. So I checked ebay and got me a used mitotuyo depth gauge for ~60â‚¬. It has an ‘SPC’-Interface for digital readout. Fortunately there is some information on the Web on howto access that interface.

I didn’t want to buy an expensive Mitutoyo-cable, so I decided to solder on my own connector.

The USB-Conversion is done by a tinymega microcontroller board which features an Atmega32U4 CPU. With the LUFA USB-StackÂ  it presents itself to the host as a virtual serial port.

The implementation ofÂ  the SPC-Protocol decoding is pretty straightforward. Send a request on one pin, read in data via SPI. I chose to do all of this in software with one interrupt (not using the SPI peripheral of the CPU). You can see my implementation here on github.

Now all that is left is to hook it up to linuxcnc. I haven’t done that yet, but most likely it only requires 10 lines of python to generate a HAL-Module.

Turns out the drives of my Scara Robot are not velocity-mode drives but torque-mode drives instead. Setting the drive input to a constant voltage results in constant accelleration. I learned this the hard way by crashing the robot :-/

Even though I had it fixed on an Europalette it managed to fall on its side. Second lesson learned: even ‘small’ a 200W drive can turn the whole thing in a fraction of a second. Hitting the floor broke some pieces. But see for yourself:

Those parts are both made out of cast aluminium. I do lack the equipment and skill to weld, so I asked a Friend of mine to do it. However, even with his long time experience he wasn’t able to fix the parts together. At first I got desperate and tried hard-soldering the Z-Motor-Mount. But even using two torches I wasnt able to get the part hot enough to accept the solder.

As a last resort I deceided to glue the parts. Fortunately my sister works as a postdoc and is an expert for aluminium epoxy bonds. She did some rought calculations for me and helped select the correct adhesive: 3M Scotch-Weld DP490.

I prepared the parts by grinding away all paint and about 100microns of the aluminium. The last step helps because cast aluminium has different properties on the outer layers compared to the inner bulk material due to the casting process. I also cut some reinforcement plates from 6061 Aluminium. Then I cleaned everything several times with water/soap and acetone. Everything was clamped down on a clean plate and glued together in two steps: First the two broken bits were fixed together. After curing the residual glue was removed by grinding, then the reinforcement plates were glued. To improve the curing process I put a box over it to trap the air inside and heated everyhing which a hot air gun to 80Â°C. Unfortunately I didnt take that many pictures of the process:

After that, I did some cosmetics. With a lot of car putty, grinding and even more putty and finally a red finish the part looked like this:

That concludes the B-Arm. Fixing the Z-Motor-Plate was basically the same. Here are some more pictures:

That concludes the repair. I will cover the mechanical and electrical rebuild in a seperate Blogpost.

To make jogging easier (doing this with the keyboard sucks) I decided its time to build a remote pendant for my Mill. From ebay I ordered a Device with a MPG (Manual Pulse Generator) and two rotary switches. Its prebuild with a case and cable. Like most china-ware, there was no documentation. But I could open the case to check the wiring and cable-colors.

The USB-Interface is a BU0836A device. It allows 8 analog inputs (unused) and 12 switches.

To make the MPG work one needs to configure a pair of inputs of the BU0836 for quadrature encoder. Fortunately there is a config utility for linux. The acutual connection was done by soldering female headers to the open cable ends of the pendant (as seen in picture 1). The pinout is as following:

The BU0836 PCB was build into a PVC for protection.

Not only the software-part ist left. To make it work in linuxcnc only a few lines of HAL code are required 🙂